Spotify vs Apple Music: Which Music Streaming Service to Pick

Nowadays, Apple Music and Spotify have become a necessary part of our daily life. When most of us want to stream music, we open Apple Music or Spotify. As an industry leader, Spotify has provided great music streaming services to more than 220 million users in 13 years. Compare to Spotify, although Apple Music has been launched for a short time, it has also attracted a large number of fans quickly and gets good ratings among teenage users. Today in this article, we will comprehensively compare Apple Music and Spotify to find out which is the king of music streaming services, and let you reasonably choose the one that suits you best. 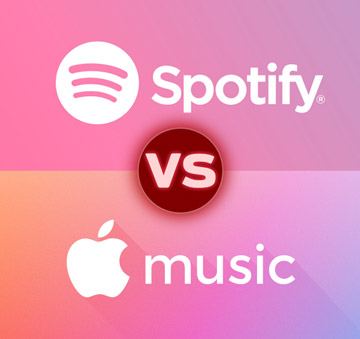 Music Library
Apple Music catalog now hosts over 60 million songs and Spotify owns over 50 million songs. Obviously. Apple Music has a larger music library. For many users, a music library with more songs can better satisfy their pursuit of enjoying music online. If the songs they like are not included in the music library of the software they are using, it will be very regrettable.

Software Interface
In terms of the color, Spotify and Apple Music are both artistic and unique. However, the UI design of Spotify is way better than Apple Music on both desktop and mobile versions. Spotify provides an easier and more intuitive way for users to discover new songs, browse playlists, stream music, etc. For a company like Apple, which emphasizes simplicity and efficiency, the UI design of Apple Music seems to be a little puzzling to users.

Audio Quality
Apple Music provides 256Kbps of each song while Spotify provides users with up to 320Kbps. The 256Kbps audio quality provided by Apple is the same on all platforms including iOS, Mac, Windows PC, Apple TV and Android.

Supported Devices
We have listed the system requirements of Spotify and Apple Music, you can check the form below to see if your device is supported by Apple Music and Spotify or not.

Free Using
Every new user of Apple Music can enjoy using Apple Music without any payment for 3 months. All the Apple Music paid features and songs are available for new users during the 3-month free trial period. Well, users can use Spotify for free all the time but they would be limited to use some features like choosing playback mode. What's more, Spotify Free users will not be able to shut the ads nor enjoy higher audio quality.

Offline Music Enjoyment
Apple Music users can download as many songs as they like while Spotify users can only download up to 10,000 songs for offline listening. But, the downloaded songs of both Spotify and Apple Music are all encrypted and limited. Spotify uses the encrypted OGG format (*.ogg) and Apple Music uses encrypted AAC format (*.m4p) to stop users from downloading songs for multiple purposes such as transferring to iPod Nano/Shuffle, Sony Walkman and car stereo for listening, re-creating, using downloaded songs in video editing software and other purposes.

TuneKeep Spotify Music Converter can download and convert Spotify songs in plain MP3, M4A, FLAC and WAV format instead of encrypted OGG with 100% original audio quality and all ID3 tags retained. It is available on the latest Mac and Windows, both Spotify Free and Premium users can download more than 10,000 songs and enjoy or use them freely. To download and convert Spotify music, users only need to drag and drop music or copy the URL link from Spotify to the converter.